MSNBC, never to be confused with the voice of reason, wasted no time skewering former President Donald Trump on the mixed results that emerged from Tuesday’s midterms.

But others did not fare as well, and MSNBC’s Chris Hayes targeted Republicans on Election Day with a diatribe concerning the “red wave” that only partially materialized.

The left-wing panelist assigned a large part of the blame for the mixed election results to Trump’s endorsements. Noting his belief that some in the GOP believe the former president has “totemic power,” Hayes declared that “he doesn’t have some magic power, I’m telling you, Republicans.”

Conceding that Trump’s endorsements were not the “full story,” the panelist chided the GOP that the “sooner you dump him, the better it is for the Republican Party” as well as U.S. democracy.

Any recommendations should be taken with a grain of salt considering that Hayes and his network have nothing but animosity for the GOP.

And MSNBC’s panel expressed extreme disappointment with Republicans’ iron grip on Florida. Overwhelming victories by a pair of GOP incumbents with possible presidential hopes, Gov. Ron DeSantis and Sen. Marco Rubio, were disparaged by the group.

And there is unquestionably a lot to warm Republican hearts after the midterm elections, with several hotly contested races swinging the way of conservatives.

Whatever misgivings the party faithful have about Tuesday’s mixed bag of results, it is unlikely that any future course will be charted based on recommendations from MSNBC.

Trump’s endorsements carried the night in some races and not in others, as could be logically expected. The network dedicated to radical progressivism swerved dramatically out of its lane by rendering advice to the GOP — and it’s clear why: Trump is a significant threat to their control. 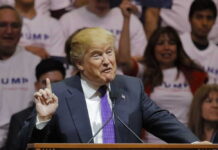