While speaking at the annual leadership meeting of the Republican Jewish Coalition, Florida Gov. Ron DeSantis (R) laid out a roadmap for the GOP to dominate politically in the coming years following Republicans’ blowout wins in Florida in the midterm elections.

It was great to be back with the Republican Jewish Coalition (@RJC) last night to share an update on our historic election.

The Florida blueprint is about exercising leadership and producing results.

Thank you to @RJC for all the support! pic.twitter.com/t8thC0UAt1

During a 25-minute speech on Saturday, DeSantis began by highlighting the massive success of the GOP in Florida — which many analysts have attributed to his popularity as governor.

“We added four new Republican congressmen to the U.S. House of Representatives from the state of Florida,” the governor said. “We secured supermajorities in the Florida legislature, the most Republicans we’ve ever had in Florida history. We helped elect 26 new conservative school board members all across the state of Florida. And we even won the state House seat that includes Miami Beach, not typically viewed as a Republican stronghold.”

“And because of the support of so many of you to our campaign, we delivered the greatest gubernatorial victory in the history of the state of Florida,” DeSantis added. “We dominated with independent voters, we secured record margins with Hispanic voters, we swept the suburbs all across the state of Florida. Our margins with rural voters were gravity-defying, we won by double digits, Miami Dade County. We won for the first time in almost 40 years, Palm Beach County.”

The Republican governor went on to argue that the results of the midterms indicate that Florida should be the “blueprint for success” for the GOP moving forward.

“And I think some of the things that we do that work are we’re all about exercising leadership and delivering results for the people that we represent,” DeSantis said.

He noted that he “did not take any polls” while serving as governor, because “the job of a leader is not to stick your finger in the wind and try to contort yourself to wherever public opinion may be trending.”

Instead, “the job of a leader is to set out a vision, to execute that vision, to show people that it’s the right vision and to deliver concrete results,” DeSantis argued, adding that “when you do that, the people respond.”

The governor also discussed several policy initiatives that he focused on during his first term in office — which included fighting woke indoctrination and protecting women’s sports — arguing that “what we’ve shown in Florida is you can stand up for truth, you can stand on principle, you can fight the woke elite, and you can win.”

“And I think this is important because the survival of the American experiment requires a revival of the enduring American principles that make this country unique,” he added. “And Florida’s formula is everything we do is rooted in those founding principles of our country, we do it with a very heavy dose of common sense, which is in very short supply nowadays. And we buttress that, with having the courage to lead on issues where you know, you may get incoming fire, but that’s the price of leadership nowadays.”

DeSantis then pointed out that, when a leader takes a stand and takes actions that are “meaningful,” there is going to be pushback from the opposition, but “you got to be willing to take those hits and keep on going” because showing the people that “you’re willing to fight for them” will bring them to the polls for you when Election Day comes around.

DeSantis went on to note that the past two years under the leadership of President Joe Biden have been difficult for many Americans, adding that Florida has shown that “in times like these, there is no substitute for victory.”

As DeSantis Continues to work with nefarious groups to subvert former President Trump’s run for president, appearances like these must be viewed from the perspective of a prospective challenger seeking and receiving the spotlight from the media. 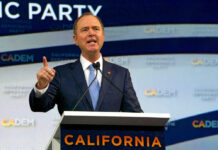